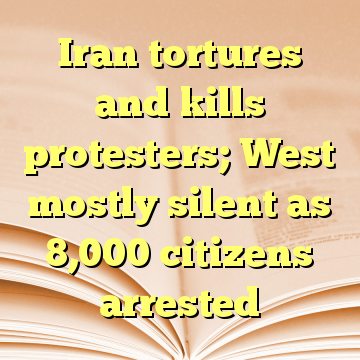 (Worthy News) – Iran’s rulers have inflicted death by torture and gunfire on citizen protesters in a crackdown since the Dec. 28 street uprising erupted, the main opposition group said Tuesday.

The Europe-based National Council of Resistance of Iran says the Islamic republic’s ubiquitous security apparatus has arrested more than 8,000 citizens and killed at least 50, all while the West has remained mostly silent. The council attributes at least five deaths to torture.

President Trump has spoken out in support of the protesters. The Treasury Department on Friday slapped further sanctions on the regime’s judiciary chief, Sadeq Amoli Larijani. Mr. Larijani has been singled out by the West for years for endorsing cruel punishments that include torture and amputation. [ Source: Washington Times (Read More…) ]