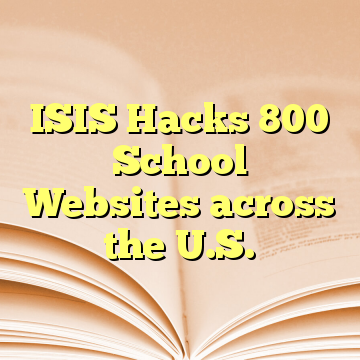 (Worthy News) – The FBI is investigating how a school website in New Jersey was hacked. It’s one of hundreds nationwide that was plastered with messages supporting ISIS.

The district said for about two hours, a hacker sent visitors to an ISIS sponsored YouTube video with Arabic audio and Saddam Hussein’s picture. There was also text reading ‘I love Islamic State.’

The district’s website is hosted by schooldesk.net. The owner said some 800 school districts nationwide, including Newtown, Connecticut, were also hacked.

The host site, School Desk, said they’re handing over copies of their servers to the FBI to help in the investigation. [ Source: CBS News (Read More…) ]