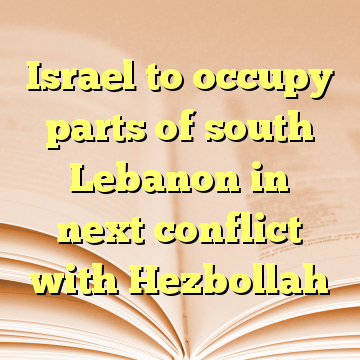 (Worthy News) – In the event of another war with Hezbollah, the IDF’s objective would be to occupy parts of southern Lebanon where the group has support and infrastructure and to force a UN resolution that improves the security situation on the northern border, a senior IDF officer said on Monday.

Thousands of soldiers from the 319th Armored Division, aka the Mapatz (“Bang”) Formation, the majority of them reservists, are currently drilling such a scenario during the second and final week of the Northern Command’s Or Hadagan exercise, the IDF’s largest in nearly 20 years.

According to a senior officer involved in the drill, Israel would not aim to occupy Lebanese territory for a significant period, rather it would be with the aim to end the conflict with Hezbollah as quickly as possible by destroying the Lebanese Shi’ite group’s capabilities and infrastructure.

Defense Minister Avigdor Liberman, who was briefed on the drill while visiting the IDF’s Northern Command alongside Chief of Staff Lt.-Gen. Gadi Eisenkot, head of the Northern Command Maj.-Gen. Yoel Strick and Maj.-Gen. (res) Udi Adam, said that “this exercise is a reminder to anyone planning to harm the security of the citizens of Israel, that the next confrontation, if it breaks out, will end with a clear decision in favor of the IDF and the State of Israel.” [ Source: Jerusalem Post (Read More…) ]