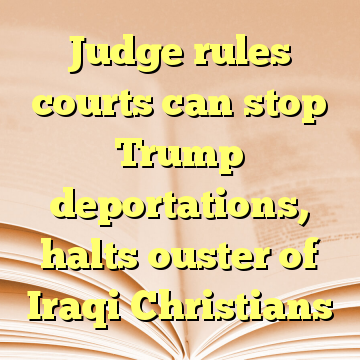 (Worthy News) – A federal judge halted the deportation of hundreds of illegal immigrants from Iraq, dealing at least a tentative blow to the Trump administration in a case that could signal even greater judicial intrusion into immigration policy.

In a case resounding with major implications for big separation-of-powers questions, District Judge Mark A. Goldsmith said federal courts have the power to provide a final appeal in immigration cases, even though Congress had tried to limit their powers and give the executive branch full control of deportations.

Judge Goldsmith overruled Congress and said he had to step in to save the Iraqis from immediate deportation, saying otherwise they risked “death, torture or other grave persecution” back home. [ Source ]