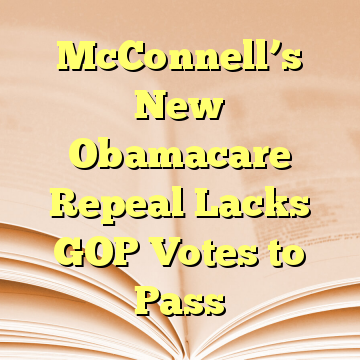 GOP Senators Susan Collins, Shelley Moore Capito and Lisa Murkowski said Tuesday they’ll oppose a repeal of the Affordable Care Act. McConnell said late Monday the Senate would vote on a repeal with a two-year delay to give Congress time to agree on a replacement, but he could afford to lose no more than two Republican votes to advance the measure.

“We’ll let Obamacare fail” and then Democrats may want to agree on a replacement, President Donald Trump told reporters at the White House. “I am disappointed because for so many years I’ve been hearing repeal and replace.” [ Source: Bloomberg (Read More…) ]