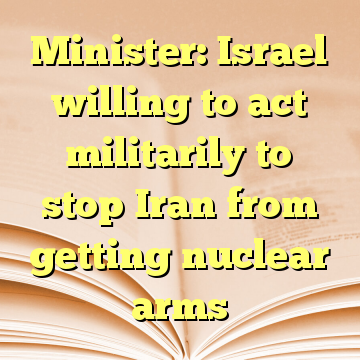 (Worthy News) – Israel is willing to resort to military action to ensure Iran never acquires nuclear weapons, Israel’s intelligence minister said on Thursday in Japan where he is drumming up support for U.S. President Donald Trump’s tougher line on Tehran.

On. Oct. 13, Trump said he would not certify that Iran is complying with an agreement on curtailing its nuclear program, signed by predecessor Barack Obama, opening a 60-day window for Congress to reimpose sanctions.

“If international efforts led these days by U.S. President Trump don’t help stop Iran from attaining nuclear capabilities, Israel will act militarily by itself,” Intelligence Minister Yisrael Katz said in an interview in Tokyo. “There are changes that can be made [to the agreement] to ensure that they will never have the ability to have a nuclear weapon.” [ Source: CBN News (Read More…) ]