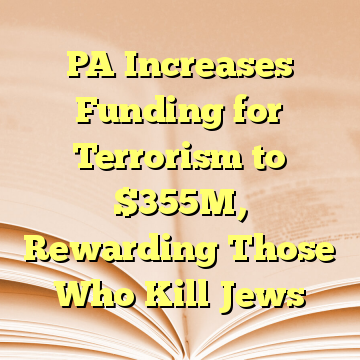 (Worthy News) – The Palestinian Authority just increased part of its budget that pays convicted terrorists and their families. The move comes despite pressure from the United States to end the practice.

“From Friday, the day that he [the terrorist who killed three people in the settlement of Halamish recently]  was arrested and he will get a life sentence for murder and his salary is eventually going to reach 12,000 shekels, which is in the area of about 4,000 US dollars a month,” Palestinian Media Watch director Itamar Marcus told CBN News.

The U.S. and the European Union condemn this practice and have pressured the Palestinian leadership to stop, but according to Marcus, the funding has increased.

The P.A.’s 2017 budget increased funds for terror prisoners by 13 percent and their families by 4 percent. This year, direct funding of terrorism has reached $355 million. [ Source:CBN News (Read More…) ]