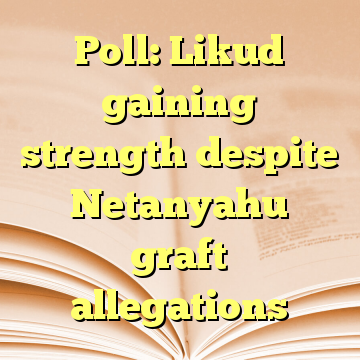 The survey, which was aired by Hadashot TV news, said Likud would win 28 seats if elections were held today. While down from its current 30, the poll result was the best yet for the right-wing party since police recommended earlier this month Netanyahu be indicted in a pair of corruption investigations. Polls over the last two weeks have shown it on 27 seats in the 120-member Knesset.

In the last few days, there have been a series of reported developments in another criminal case linked to Netanyahu; Saturday’s poll suggested these have not dented Netanyahu or his party’s popularity. [ Source: Times of Israel (Read More…) ]