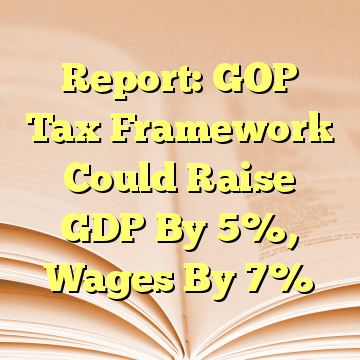 (Worthy News) – President Donald Trump’s tax reform framework could raise GDP by as much as 5 percent and wages by as much as 7 percent, according to a new study from Boston University economists.

“We find that, depending on the year considered, the new Republican tax plan raises GDP by between 3 and 5 percent and real wages by between 4 and 7 percent,” the economists explain. “This translates into roughly $3,500 annually more annual real take-home pay for the average American household.”

Economists believe this growth can happen due to the plan’s aim to reduce the marginal effective corporate tax rate from 34.6 percent to 18.6 percent, which they believe will grow the capital stock by 12 to 20 percent. [ Source: Washington Free Beacon (Read More…) ]