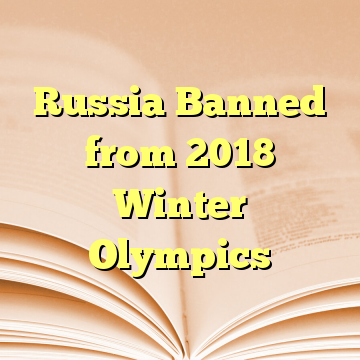 (Worthy News) – The International Olympic Committee banned Russia on Tuesday from competing as a country in the upcoming Winter Games in Pyeongchang, South Korea, but said that individual Russians could compete as an “Olympic Athlete from Russia.”

The long-awaited IOC decision punishing Russia for a state-sponsored doping campaign during the 2014 Olympics in Sochi, Russia, came little more than two months before the quadrennial skiing, skating and sledding contests unfold at venues in the mountains and along the coast of South Korea.

In addition to the 2018 ban for Russia’s representation as a country, the IOC fined the Russian Olympic Committee $15 million and suspended its president, Alexander Zhukov, as an IOC member. [ Source: Voice of America (Read More…) ]