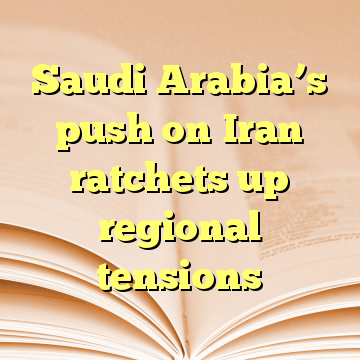 (Worthy News) – Saudi Arabia is more aggressively confronting its rival Iran on multiple fronts. It’s a policy that risks sharpening several conflicts in the Middle East, even though so far it has failed to score any successes in stemming Tehran’s influence.

The bolder steps are largely seen as the work of the son of King Salman, Crown Prince Mohammed bin Salman, who has consolidated his power. Under his leadership, the kingdom has shown a readiness to shake up the region, launching a military campaign in Yemen against rebels it sees as Iranian proxies and sparking a confrontation with Qatar in part over ties with Tehran.

Still, Iran has been able to use wars in Iraq and Syria to build a bridge of alliances stretching from its border to the Mediterranean. The question is whether the Saudis will push even harder against Iran – and what will happen if they do. So far, the kingdom’s policies appear to have the full support of U.S. President Donald Trump. [ Source: Globe and Mail (Read More…) ]