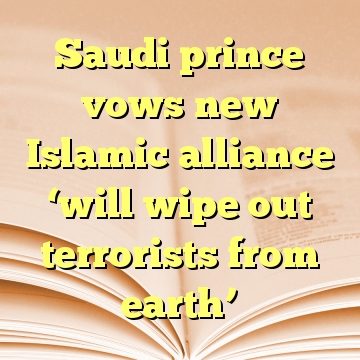 (Worthy News) – Saudi Arabia’s powerful crown prince vowed to “pursue terrorists until they are wiped from the face of the earth” as officials from 40 Muslim countries gathered Sunday in the first meeting of an Islamic counter-terrorism alliance.

“In past years, terrorism has been functioning in all of our countries … with no coordination” among national authorities, Prince Mohammed bin Salman, who is also the Saudi defence minister, said in his keynote speech at the gathering in Riyadh.

“This ends today, with this alliance.” [ Source: Times of India (Read More…) ]