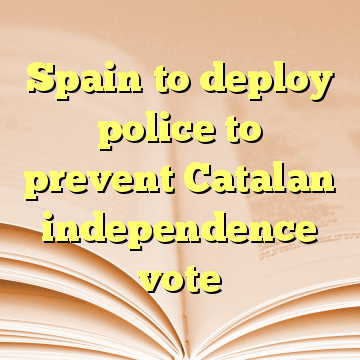 (Worthy News) – Police will be deployed at polling stations to prevent people from voting in the Catalan independence referendum, the Spanish government has confirmed.

Although the Catalonia regional government has insisted the unilateral poll will go ahead on Sunday, the Spanish government has vowed to stop the vote, which it says is a clear violation of the constitution. Spain’s constitutional court has suspended the legislation underpinning the referendum while it rules on its legality.

A spokesman for the Spanish government’s Catalan delegation said on Tuesday that the region’s prosecutor had ordered the Mossos d’Esquadra, Catalonia’s police force, to take control of polling booths and identify those in charge. [ Source: UK Guardian (Read More…) ]