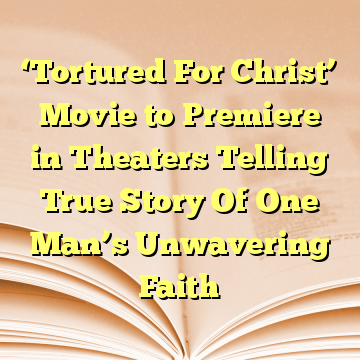 (Worthy News) – The Voice of the Martyrs presents “Tortured For Christ” the movie, a true-life cinematic retelling of the testimony of VOM founder Pastor Richard Wurmbrand, who kept his faith despite facing 14 years of torture in a communist prison.

The film will tell the powerful account written in Wurmbrand’s international bestselling book, Tortured for Christ. The timing of the film lines up just in time to honor the 50th anniversary of the book’s 1967 release.

In keeping the cinematic portrayal as real as possible, filmmakers shot the picture in Romania – in the very prison where Pastor Wurmbrand was tortured and spent so much time in solitary confinement. The dialogue will be presented in English, Romanian and Russian (with English subtitles) to also hold to the authenticity of this true story. All scenes were acted out rather than being in interview form. [ Source: Christian Post (Read More…) ]