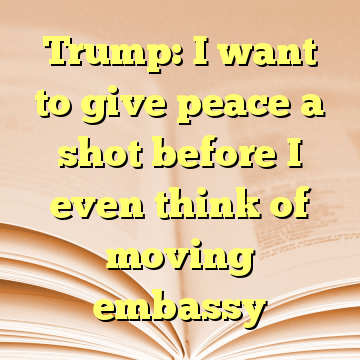 (Worthy News) – US President Donald Trump said in an interview broadcast on Saturday that he wanted to give a shot at achieving peace between Israel and the Palestinians before moving the US embassy from Tel Aviv to Jerusalem.

In June, Trump signed a temporary order to keep the US embassy in Tel Aviv, despite a campaign promise he made to move it to Jerusalem.

In an interview with former Arkansas Governor Mike Huckabee on the TBN program “Huckabee,” Trump noted his administration was working on a plan for peace between the two sides.

“I want to give that a shot before I even think about moving the embassy to Jerusalem,” he said. [ Source: Jerusalem Post (Read More…) ]