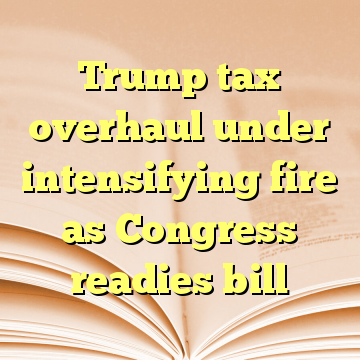 (Worthy News) – President Donald Trump’s plan for overhauling the U.S. tax system faced growing opposition from interest groups on Sunday, as Republicans prepare to unveil sweeping legislation that could eliminate some of the most popular tax breaks to help pay for lower taxes.

Republicans who control the U.S. House of Representatives will not reveal their bill until Wednesday. But the National Association of Home Builders, a powerful housing industry trade group, is already vowing to defeat it over a change that could affect the use of home mortgage deductions, while Republican leaders try to head off opposition to possible changes to individual retirement savings and state and local tax payments.

Trump and Republicans have vowed to enact tax reform this year for the first time since 1986. But the plan to deliver up to $6 trillion in tax cuts for businesses and individuals faces challenges even from rank-and-file House Republicans. [ Source (Read More…) ]