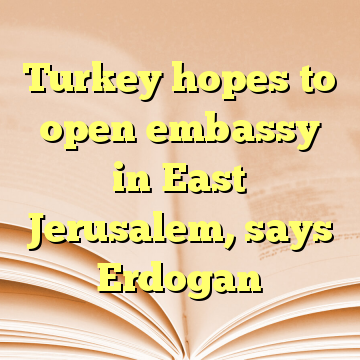 (Worthy News) – Turkey intends to open an embassy in East Jerusalem, President Recep Tayyip Erdoğan has said, days after leading calls at a summit of Muslim leaders for the world to recognize it as the capital of a Palestinian state.

The Organisation of Islamic Cooperation summit was a response to the US president, Donald Trump’s decision earlier this month to recognize Jerusalem as Israel’s capital. His move broke with decades of US policy and international consensus that the city’s status must be left to Israeli-Palestinian peace negotiations.

Erdoğan said in a speech to members of his AK party in Turkey’s southern province of Karaman that the country’s consulate general in Jerusalem was already represented by an ambassador. [ Source: UK Guardian (Read More…) ]