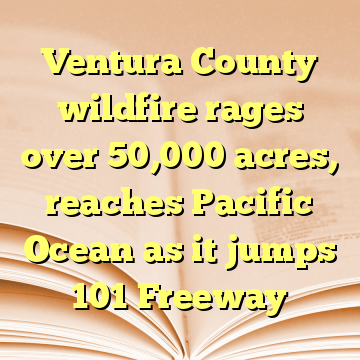 (Worthy News) – The destructive Thomas fire finally met a fire line it could not jump: the Pacific Ocean.

The fast-moving, wind-driven wildfire continued to rage through the city of Ventura on Tuesday evening, jumping Highway 33 and burning through oil fields before crossing the 101 Freeway into Solimar Beach, authorities said.

The blaze has consumed 50,500 acres on its journey to the ocean. The 101 remains open, but authorities warned drivers to be cautious traveling through the area.

Thousands of homes were still threatened by flames, 27,000 people were forced to flee, a firefighter was injured and Gov. Jerry Brown declared a state of emergency, as some 1,100 personnel continued to battle the blaze. [ Source: LA Times (Read More…) ]