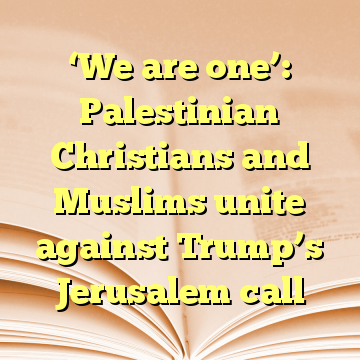 (Worthy News) – Less than an hour after U.S. President Donald Trump recognized Jerusalem as Israel’s capital, Palestinians protested by turning off the lights on the Christmas tree outside Bethlehem’s Church of the Nativity, the traditional birthplace of Jesus.

It was a timely reminder that while headlines focused on Islamist calls for uprisings and Trump’s references to Jewish historical ties, the president’s words also stirred deep feelings among the Palestinians’ small Christian community.

Coming out of the Sunday service in his Assyrian Catholic church in Jerusalem, Fredrick Hazo accused Trump of “dragging all the world into trouble”, and called on the U.S. leader to reverse his decision.

“We are united – Christians, Muslims, we are one,” said the 59-year-old Palestinian musician, standing in an alley in the heart of the Old City, surrounded by shops selling religious trinkets. [ Source: Reuters (Read More…) ]