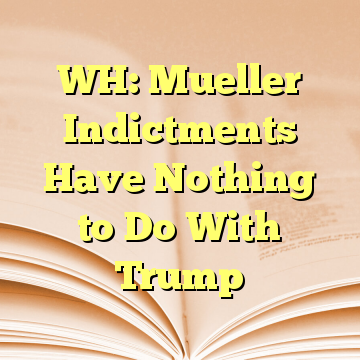 (Worthy News) – The White House said Monday that the indictments of former Trump campaign manager Paul Manafort and his business associate Rick Gates have nothing to do with President Donald Trump.

The White House also said that President Trump has “no intention or plan to make any changes in regards to the special counsel.”

“There’s clear evidence of the Clinton campaign colluding with Russian intelligence to spread disinformation and smear the president to influence the election. We’ve been saying from day one there has been no evidence of Trump-Russia collusion, and nothing in the indictment today changes that at all,” she said. [ Source: CNS News (Read More…) ]