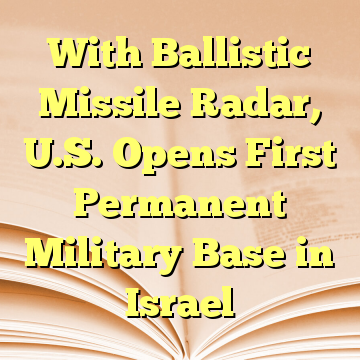 (Worthy News) – The first permanent U.S. military base in Israel was dedicated on Monday.

A few dozen American soldiers will live and work on the base, situated inside the school of the Aerial Defense Division of the Israel Air Force, in the Negev. High-ranking U.S. officers attended the dedication ceremony.

Brig. Gen. Zvi Haimovich, the commander of the division, said the new base reflects the close military cooperation between Israel and the United States. He declined to elaborate on the exact activities of the American soldiers, but said, “The base is here to stay. It involved a significant allocation of resources, in the understanding that this was right and necessary and part of the United States’ assets in Israel.”

He was evidently referring to the U.S. soldiers who have been operating the X-Band radar system that the United States deployed in the Negev in 2009. The powerful system, which can detect missile launches from a distance of hundreds of kilometers away, was part of U.S. efforts to improve Israel’s defensive capabilities in the face of the growing threat from Iran. [ Source: Ha’aretz (Read More…) ]