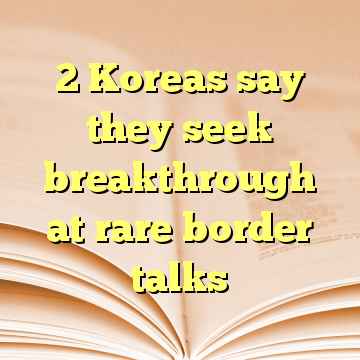 (Worthy News) – Senior officials from North and South Korea began the rivals’ first formal talks in about two years Tuesday to discuss how to cooperate in next month’s Winter Olympics in the South and how to improve their long-strained ties.

The talks in the border village of Panmunjom were arranged after North Korea’s leader Kim Jong Un recently made an abrupt push for improved ties with South Korea and are closely watched by the outside world after a year of elevated tensions over North Korea’s expanding nuclear and missile programs.

“I think we should be engaged in these talks with an earnest, sincere manner to give a New Year’s first gift – precious results (of the talks) to the Korean nation,” chief North Korean delegate Ri Son Gwon said at the start of the negotiations, according to media footage from the venue. [ Source: Washington Times (Read More…) ]