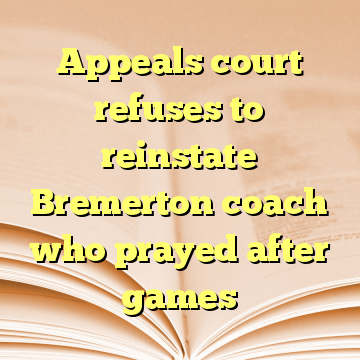 (Worthy News) – The 9th Circuit Court of Appeals has refused to reinstate former Bremerton High School football coach Joseph Kennedy, who lost his job after he refused to stop praying on the field after games.

A three-judge panel ruled Wednesday that Kennedy was acting as a teacher, with a duty to the district, students and parents to set an example and “communicate demonstratively” to those groups. The appeals court found Kennedy “took advantage of his position to press his particular views upon impressionable and captive minds before him.”

In two opinions totaling 62 pages, the appeals judges said Kennedy could not prove he was exercising his First Amendment rights as a private citizen when he insisted, against orders by the Bremerton School District, on taking a knee at the 50-yard line after football games and praying. [ Source (Read More…) ]