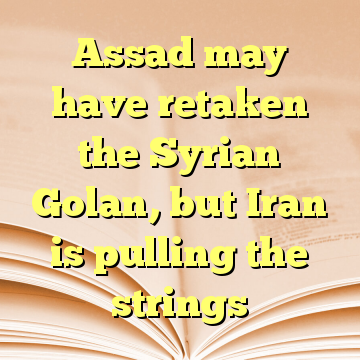 (Worthy News) – The evacuation of several hundred Syrian rebels from the Beit Jinn area on the Syrian side of the Golan Heights over the weekend puts Israel in an old-new position on the border. Assad’s army is once again at the fences, just like it was from 1967 to 2011.

In the southern Golan, a few pockets of resistance remain from supporters of the Islamic State group, or as they are known locally, the Khalid Ibn Walid Army. But beyond that, the Syrians have almost completely retaken control of the border with Israel.

Only a few moderate forces remain south of Kuneitra that would maintain some relative cooperation with Israel or keep the Shiite or Sunni extremists at bay. [ Source: Times of Israel (Read More…) ]