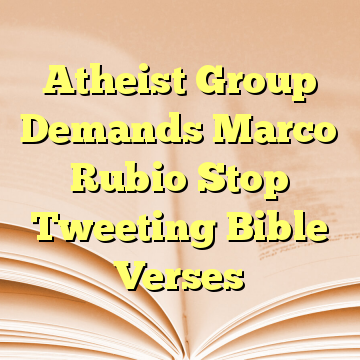 (Worthy News) – The nation’s largest atheist organization is demanding that Sen. Marco Rubio, R-Fla., stop tweeting Bible verses from his Twitter account, telling him that doing so is a violation of the United States Constitution.

The Wisconsin-based Freedom From Religion Foundation, which advocates for strict adherence to separation of church and state and has over 1,400 members in Florida, sent the 46-year-old 2016 presidential candidate a demand letter on Tuesday to complain about an increase in Rubio’s Bible-themed tweets since May.

“We understand that you have been tweeting Bible verses from @MarcoRubio to nearly 3 million followers. It appears that you began tweeting the Bible in mid-May and have been doing so regularly ever since. This is not an errant Bible verse or two, but more than 60 Bible verses in three months,” the letter, written by FFRF attorney Andrew Seidel, reads. [ Source (Read More…) ]