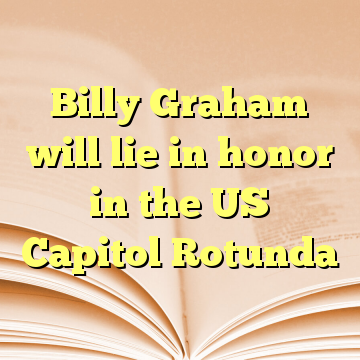 (Worthy News) – The Rev. Billy Graham’s body will lie in honor in the U.S. Capitol Rotunda next week, the first time a private citizen has been accorded such recognition since civil rights hero Rosa Parks in 2005.

The two-day viewing in Washington on Feb. 28 and March 1 will be part of nine days of mourning for postwar America’s most famous evangelist, who died Wednesday at his home in North Carolina’s mountains at age 99.

“America’s Pastor” will be laid to rest March 2 at the foot of a cross-shaped walkway at the worldwide headquarters of his evangelical empire in Charlotte, buried in a simple prison-made plywood coffin next to his wife, Ruth, who died in 2007. [ Source: ABC News (Read More…) ]