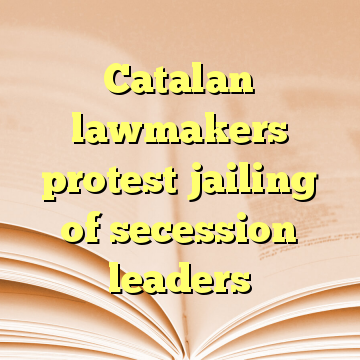 (Worthy News) – About 50 Spanish and Catalan party lawmakers have held up posters in Spain’s parliament demanding the release of two pro-Catalonia independence movement leaders, describing them as political prisoners.

Wednesday’s protest in Madrid lasted around 15 seconds before the lawmakers heeded warnings that they were out of order and sat down.

The demonstration was over Monday’s jailing of Jordi Sanchez and Jordi Cuixart, leaders of the Catalan grassroots organizations Catalan National Assembly and Omnium Cultural, in a sedition investigation. Tens of thousands of people demonstrated Tuesday in Catalonia, demanding their release. [ Source: Fox News (Read More…) ]