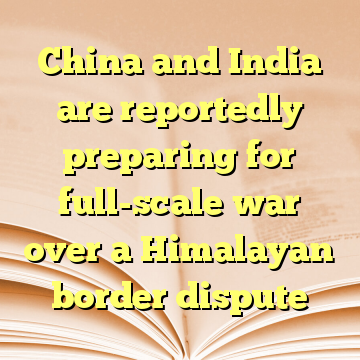 (Worthy News) – Chinese and Indian troops are readying themselves for a possible armed conflict in the event they fail in their efforts to achieve a peaceful resolution to their border dispute on the Doklam plateau in the Himalayas, observers said.

On Friday, India’s defense minister Arun Jaitley told parliament that the country’s armed forces are “prepared to take on any eventuality” of the stand-off, Indian Express reported the same day.

Sources close to the Chinese military, meanwhile, said that the People’s Liberation Army is increasingly aware of the possibility of war, but will aim to limit any conflict to the level of skirmishes, such as those contested by India and Pakistan in Kashmir. [ Source (Read More…) ]