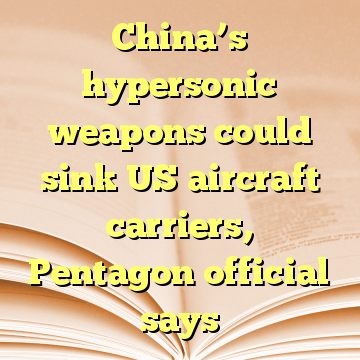 (Worthy News) – The era of the American aircraft carrier as the premier embodiment of military might could be ending unless the U.S. develops defenses for the next generation of highly maneuverable, super-fast hypersonic weapons under development by Russia and China, the Pentagon’s top weapons researcher said Tuesday.

Michael Griffin, undersecretary of defense for research and engineering, said China is spending billions to develop a non-nuclear version of the weapons that could render U.S. aircraft carriers vulnerable to attack.

“In round numbers, China has done 20 times as many of hypersonic weapons tests as has the United States over the last decade,” Griffin told the annual McAleese-Credit Suisse Defense Conference. [ Source: Washington Examiner (Read More…) ]