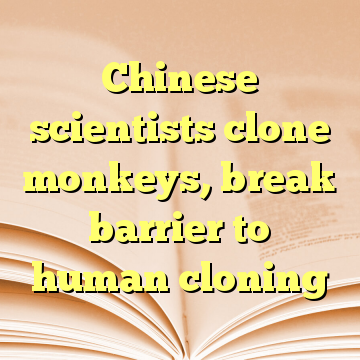 (Worthy News) – Chinese scientists have cloned monkeys using the same technique that produced Dolly the sheep two decades ago, breaking a technical barrier that could open the door to copying humans.

Zhong Zhong and Hua Hua, two identical long-tailed macaques, were born eight and six weeks ago, making them the first primates — the order of mammals that includes monkeys, apes and humans — to be cloned from a non-embryonic cell.

It was achieved through a process called somatic cell nuclear transfer (SCNT), which involves transferring the nucleus of a cell, which includes its DNA, into an egg which has had its nucleus removed. [ Source: NBC News (Read More…) ]