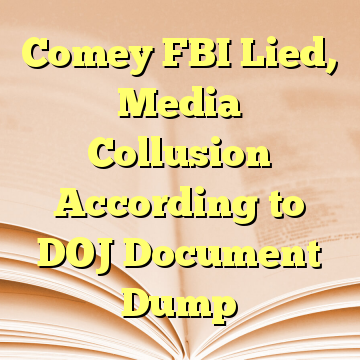 (Worthy News) – The American Center for Law and Justice (ACLJ) obtained hundreds of pages of documentation from the Department of Justice (DOJ) through a Freedom of Information Act (FOIA) request detailing former Attorney General Loretta Lynch’s tarmac meeting with former President Bill Clinton which unveils a cover-up by government officials and the establishment media.

From the American Center for Law and Justice:

First, the Comey FBI lied to us. Last July, we sent FOIA requests to both the Comey FBI and the Lynch DOJ asking for any documents related to the Clinton Lynch plane meeting. The FBI, under the then directorship of James Comey, replied that “No records responsive to your request were located.”

The documents we received today from the Department of Justice include several emails from the FBI to DOJ officials concerning the meeting. One with the subject line “FLAG” was correspondence between FBI officials (Richard Quinn, FBI Media/Investigative Publicity, and Michael Kortan) and DOJ officials concerning “flag[ing] a story . . . about a casual, unscheduled meeting between former president Bill Clinton and the AG.” The DOJ official instructs the FBI to “let me know if you get any questions about this” and provides “[o]ur talkers [DOJ talking points] on this”. The talking points, however are redacted.

Another email to the FBI contains the subject line “security details coordinate between Loretta Lynch/Bill Clinton?”

On July 1, 2016 – just days before our FOIA request – a DOJ email chain under the subject line, “FBI just called,” indicates that the “FBI . . . is looking for guidance” in responding to media inquiries about news reports that the FBI had prevented the press from taking pictures of the Clinton Lynch meeting. The discussion then went off email to several phone calls (of which we are not able to obtain records). An hour later, Carolyn Pokomy of the Office of the Attorney General stated, “I will let Rybicki know.” Jim Rybicki was the Chief of Staff and Senior Counselor to FBI Director Jim Comey. The information that was to be provided to Rybicki is redacted.

Also of note several of the documents contain redactions that are requested “per FBI.”

It is clear that there were multiple records within the FBI responsive to our request and that discussions regarding the surreptitious meeting between then AG Lynch and the husband of the subject of an ongoing FBI criminal investigation reached the highest levels of the FBI.

However, on October 21, 2016, the Comey FBI replied to our legal demands that “No records responsive to your request were located.” This is in direct contravention to the law, and we are preparing further legal action to force the FBI to come clean and turn over ALL documents related to this matter to us in a timely manner.

Second, the hundreds of pages of (heavily redacted – more on that below) documents paint a clear picture of a DOJ in crisis mode as the news broke of Attorney General Lynch’s meeting with former President Clinton. In fact, the records appear to indicate that the Attorney General’s spin team immediately began preparing talking points for the Attorney General regarding the meeting BEFORE ever speaking with the AG about the matter.

Third, there is clear evidence that the main stream media was colluding with the DOJ to bury the story. A Washington Post reporter, speaking of the Clinton Lynch meeting story, said, “I’m hoping I can put it to rest .” The same Washington Post reporter, interacting with the DOJ spin team, implemented specific DOJ requests to change his story to make the Attorney General appear in a more favorable light. A New York Times reporter apologetically told the Obama DOJ that he was being “pressed into service” to have to cover the story. As the story was breaking, DOJ press officials stated, “I also talked to the ABC producer, who noted that they aren’t interested, even if Fox runs with it.”

Two days after the meeting, DOJ officials in a chain of emails that includes emails to Attorney General Lynch herself stated that the media coverage of the meeting “looks like all or most are FOX” and that “CBS . . . just says a few lines about the meeting.”

Fourth, DOJ bureaucrats have redacted all the talking points, discussions of talking points, a statement on the meeting that was apparently never delivered because there was not enough media coverage on the meeting, and its substantive discussions with the FBI on the matter. They absurdly claim the “deliberative process exemption” to FOIA, which is only supposed to apply to agency rulemaking processes. [ Source:American Center for Law and Justice (Read More…) ]