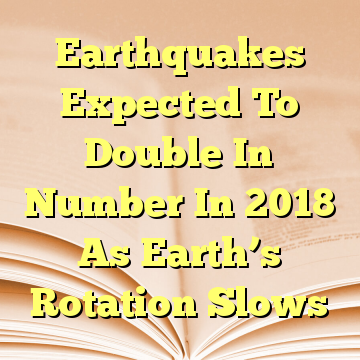 (Worthy News) – A team of scientists presented a research paper to the Geological Society of America, revealing some ground shaking information. The paper has warned that there could be a big increase in numbers of devastating earthquakes around the world next year caused by the slowing down of the Earth’s rotation.

The research was conducted and presented by Roger Bilham of the University of Colorado in Boulder and Rebecca Bendick of the University of Montana in Missoula at the annual meeting of the Geological Society of America. They found that variations in the speed of the Earth’s rotation could set off intense seismic activity, particularly in the tropical-equatorial regions where the population density is very high.

Any change is the Earth’s rotation speed is minuscule. It is affected by a factor of milliseconds and the changes in the length of day and night cannot be perceived, only calculated. But these small changes set off a seismic rumble that can release vast amounts of underground energy. [ Source: IBT Times (Read More…) ]