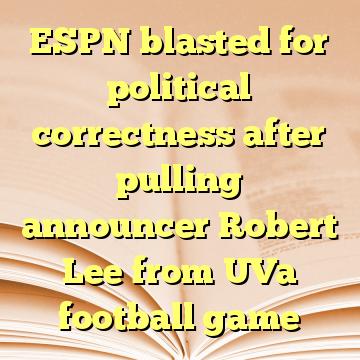 (Worthy News) – Apparently, even being Asian doesn’t mean people won’t take you for being a white nationalist.

ESPN confirmed Tuesday night that it had decided to pull an announcer from calling a University of Virginia football game because his name is Robert Lee. This Robert Lee is Asian.

“We collectively made the decision with Robert to switch games as the tragic events in Charlottesville were unfolding, simply because of the coincidence of his name. In that moment it felt right to all parties,” reads the ESPN statement posted at the popular Fox Sports college-football blog Outkick the Coverage. [ Source (Read More…) ]