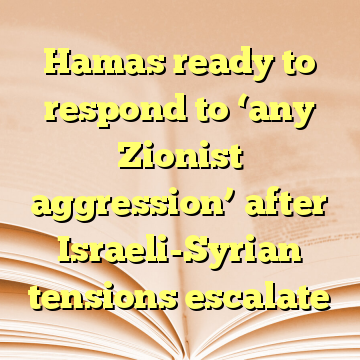 “The Brigades have raised the level of alert to protect our people and respond to any Zionist aggression in the light of the ongoing events taking place in northern occupied Palestine,” spokesperson Abu-Obeida reportedly wrote.

The tensions along Israel’s northern border with Syria rapidly increased Saturday morning after an Iranian drone that entered Israel’s airspace was shot down by the Israeli Air Force. In response, Israeli fighter jets targeted the control vehicle from which the drone was operated in the Syrian T-4 Airbase near Palmyra. [ Source: Jerusalem Online (Read More…) ]