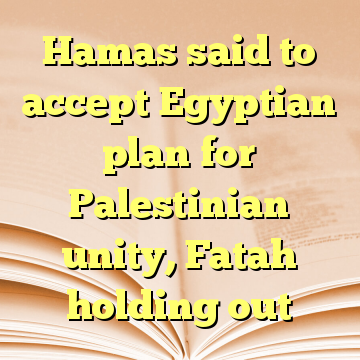 However, Palestinian Authority President Mahmoud Abbas’s Fatah party has yet to agree to the terms and has sent in a counter-offer. Sissi reportedly presented Abbas with the deal when the two met early in July in Cairo amid spiraling tensions between Hamas and Fatah.

The proposed deal includes Hamas dissolving a committee it formed to administer tasks historically carried out by the PA, as well as a commitment by Abbas to end harsh measures he has leveled against Gaza since April, including reductions in support payments for electricity, medical aid, and governmental salaries for residents of the Strip. [ Source: Times of Israel (Read More…) ]