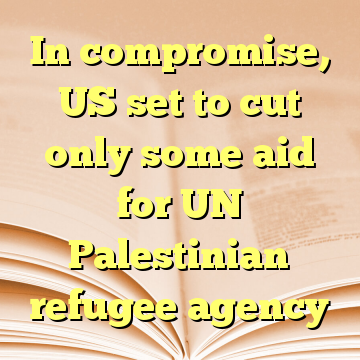 (Worthy News) – The Trump administration is preparing to withhold tens of millions of dollars from the UN agency for Palestinian refugees, cutting the year’s first contribution by more than half or perhaps entirely, and making additional donations contingent on major changes to the organization, according to US officials.

US President Donald Trump has not made a final decision, but appears more likely to send only $60 million of the planned $125 million first installment to the UN Relief and Works Agency, said the officials, who were not authorized to publicly discuss the matter and spoke on condition of anonymity.

Future contributions would require the agency, facing heavy Israeli criticism, to demonstrate significant changes in operations, they said, adding that one suggestion under consideration would require the Palestinians to first re-enter peace talks with Israel. [ Source: Times of Israel (Read More…) ]