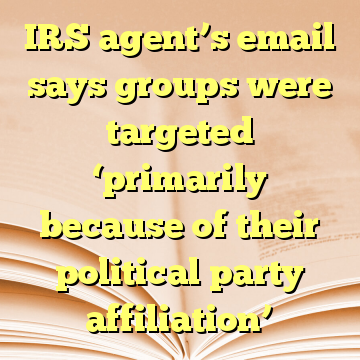 (Worthy News) – Lawyers think they have finally found the smoking gun in the IRS’s tea party targeting scandal: an email from an IRS agent to her supervisors alerting them that the agency was, in fact, singling out some groups’ applications for extreme scrutiny “primarily because of their political party affiliation.”

The email was released last month as part of a massive document dump in a class-action lawsuit filed in Ohio by hundreds of conservative groups who were targeted for extra review and intrusive questioning.

It contradicts the IRS’s official stance over the years contending that conservative groups were wrongly scrutinized, but it was a result of their behavior, not their politics. [ Source: Washington Times (Read More…) ]