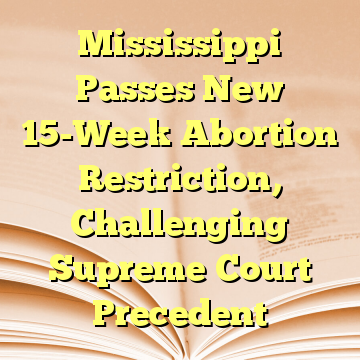 (Worthy News) – Mississippi lawmakers on Thursday passed what is likely to be the nation’s most restrictive abortion law.

The House voted 75-34 in favor of the measure, which would make most abortions illegal after 15 weeks of pregnancy. Republican Gov. Phil Bryant has said he’ll sign the bill. The Mississippi Senate passed the measure on Tuesday.

The bill could spark a court challenge focusing on whether states can ban abortions before fetuses can survive outside the womb. The owner of Mississippi’s only abortion clinic, Jackson Women’s Health Organization, has pledged to sue. [ Source: CBN News (Read More…) ]