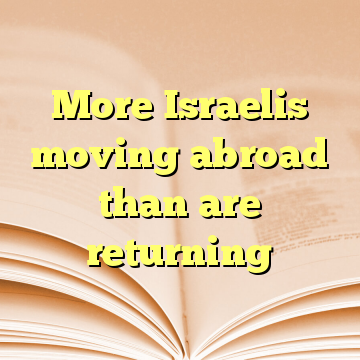 (Worthy News) -Of the 16,700 Israeli citizens who moved overseas for an extended period of time in 2015, only about 8,500 returned, representing a noticeable increase in the exit rate and a decrease in the return rate compared to previous years, according to a report the Central Bureau of Statistics published on Monday.

The report tracked Israel-born citizens and does not account for immigrants.

Following a six-year period of decline in the number of Sabras leaving the country on a long-term basis, the study revealed a sizable increase starting in 2009. [ Source (Read More…) ]