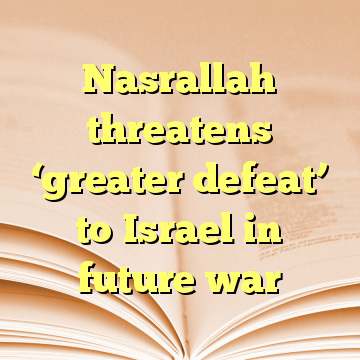 (Worthy News) – Hezbollah leader Hassan Nasrallah marked 11 years to the Second Lebanon War on Sunday with a speech in which he threatened that “the defeat Israel suffered in 2006, it will suffer again, but it will be a much greater defeat.”

Israel, he said, failed to eliminate Hezbollah in the 2006 war. “Every time an Israeli official talks about Hezbollah becoming stronger, he actually admits Israel’s defeat to Hezbollah,” Nasrallah claimed.

Nasrallah argued that Israel recognized Hezbollah’s strength, “an example of that is the evacuation of the ammonia tank in Haifa. We hope they examine moving the nuclear reactor in Dimona as well, as it is more dangerous and needs to be taken care of.”

He noted since the 2006 Second Lebanon War, “there has been a new resistance in Lebanon that doesn’t joke around, doesn’t waste time, doesn’t take an annual vacation. It works day and night, studying all of the developments, planning and examining its plans, training and arming itself in the best weapons it can obtain, because that is its natural right.” [ Source (Read More…) ]