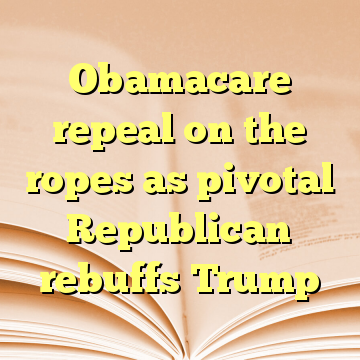 (Worthy News) – U.S. Senator Susan Collins rebuffed intense lobbying from fellow Republicans and the promise of money for her state in deciding on Monday to oppose – and likely doom – her party’s last-ditch effort to repeal Obamacare.

The most moderate of Republican senators joined John McCain and Rand Paul in rejecting the bill to end Obamacare. It was a major blow for President Donald Trump who has made undoing Democratic former President Barack Obama’s signature healthcare law a top priority since the 2016 campaign and who pressured Collins in a call on Monday.

The bill’s sweeping cut in funding to Medicaid, a program for low income citizens and disabled children, was her top reason for opposing the bill, said Collins, from the state of Maine where 20 percent of the population depend on the program. [ Source (Read More…) ]