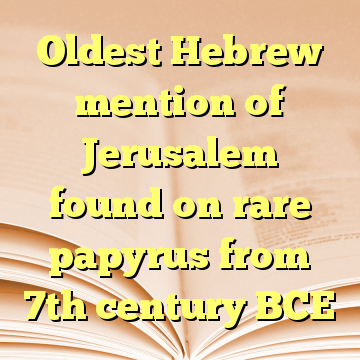 (Worthy News) – A rare, ancient papyrus dating to the First Temple Period — 2,700 years ago — has been found to bear the oldest known mention of Jerusalem in Hebrew.

The fragile text, believed plundered from a cave in the Judean Desert cave, was apparently acquired by the Israel Antiquities Authority during a sting in 2012 when thieves attempted to sell it to a dealer. Radiocarbon dating has determined it is from the 7th century BCE, making it one of just three extant Hebrew papyri from that period, and predating the Dead Sea Scrolls by centuries.

The IAA’s Eitan Klein said the dating of the papyrus had been confirmed by comparing the text’s orthography with other texts from the period. [ Source: Times of Israel (Read More…) ]