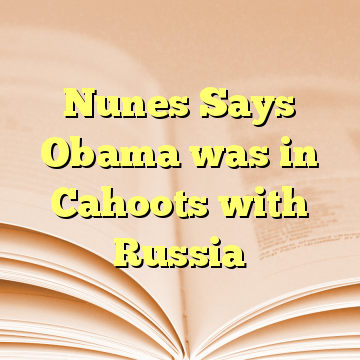 (Worthy News) – House Intelligence Committee Chairman Devin Nunes is blaming former President Obama for being in cahoots with Russia for eight years and setting the stage for orchestrating a conspiracy theory of collusion between Moscow and Donald Trump during the 2016 election.

“We went through a whole European infrastructure consolidation process of military installations across Europe, abandoned a lot of abilities in the North Atlantic to track Russian subs,” Nunes said. “We actually had the president of the United States, who said on a hot mic to the prime minister of Russia at the time, ‘Just tell Vladimir to wait after the election.’ That was President Obama who said that. So who created this Russian threat? Who? It was the last administration that put us in this position.”

Nunes also turned up the pressure on the Democratic Party and the media in his point-by-point refutation of the recently released memo by the House Intelligence Committee minority.

“We actually wanted this (memo) out,” said Nunes, R-Calif. “It’s clear evidence that the Democrats are not only covering this up, but they’re also colluding with parts of the government to cover this up.” [ Source: World Net Daily (Read More…) ]