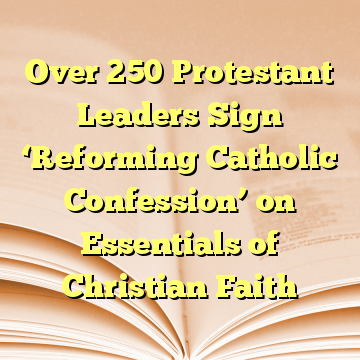 (Worthy News) – Over 250 prominent scholars, pastors, and church leaders from around the world released on Tuesday a theological statement affirming the essentials of the Reformation. And its Protestant authors contend that in this 500th anniversary year, the document is a “catholic” statement in its best sense.

The Reforming Catholic Confession is a document which outlines the main theological commitments held by a wide breadth of Protestant Christians, including evangelicals, since the Reformation. The purpose of such a statement is to demonstrate the remarkable togetherness that exists throughout the world among Protestants on the core elements of Christianity, said Jerry Walls, an author and professor of philosophy at Houston Baptist University.

Despite how some Roman Catholics fasten the divisions within Protestantism as a case against it, including the joking about there being 33,000 different denominations — as if the entire legacy of the Reformation is endless religious splintering — the Confession showcases the extensive agreement on the substance of the historic Christian faith, Walls told The Christian Post. [ Source: Christian Post (Read More…) ]