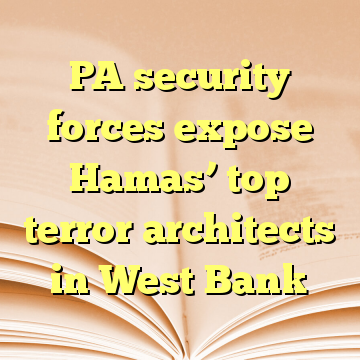 (Worthy News) – The Palestinian Authority’s security forces revealed on Wednesday the identities of senior Hamas operatives behind efforts to rehabilitate the group’s terrorist infrastructure in Judea and Samaria, chief among them Maher Obeid, the organization’s newly appointed military commander in the West Bank.

The terrorist cells and infrastructure built by Hamas’ military wing in Judea and Samaria were decimated by Israel during Operation Defensive Shield in 2002 during the Second Intifada, targeted assassinations over the course of the previous decade and tight security cooperation between Israeli and PA security apparatuses.

However, since the mass release of terrorists within the framework of the Gilad Schalit prisoner exchange in 2011, the organization has taken pains to establish a “West Bank command” to run its operations there. [ Source: Israel Hayom (Read More…) ]