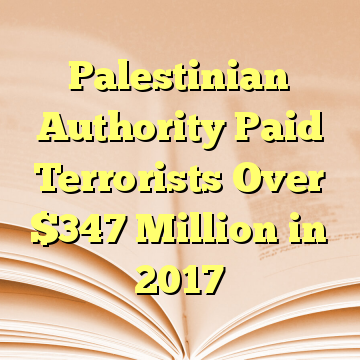 (Worthy News) – The Palestinian Authority paid terrorists and their families more than $347 million last year, according to its own records.

The Israeli Defense Ministry on Tuesday presented the data on the PA’s payments to terrorists to the Foreign Affairs and Defense Committee of the Knesset, the name for Israel’s Parliament, the Jerusalem Post reported.

The PA pays terrorists who are sentenced to three to five years in prison $580 per month, equal to the average monthly income of a Palestinian. Those sentenced to twenty years or more in prison receive five times that amount for the rest of their lives for their crimes, which are more severe and often involve murdering Israelis. [ Source: Washington Free Beacon (Read More…) ]