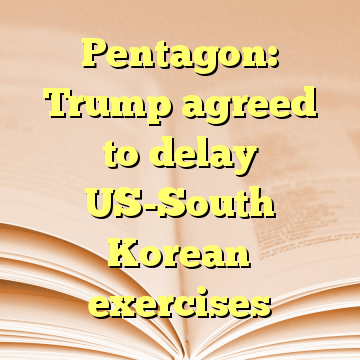 (Worthy News) – In a possible opening for diplomacy, the Trump administration on Thursday agreed to delay joint military exercises with South Korea until after the Pyeongchang Winter Olympics.

The decision could help reduce tensions as the Koreas consider holding their first direct talks in two years, even though Defense Secretary Jim Mattis insisted the delay was a practical necessity to accommodate the Olympics, not a political gesture.

Mattis said the drill would be conducted sometime after the Winter Paralympics, which will be held March 8-18 following the Feb. 9-25 Olympic Games. [ Source: Washington Times (Read More…) ]