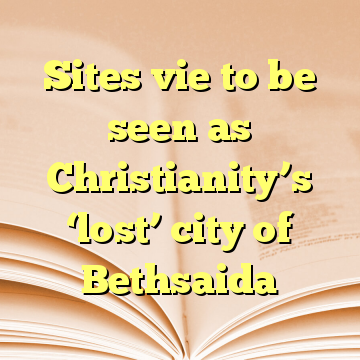 (Worthy News) – In the New Testament, Bethsaida is a place of miracles. Here, Jesus cured a blind man, turned a few loaves and fishes into food for 5,000, and walked on water. But mysteriously, its location was lost. Now, dueling archaeological excavations place it in the same vicinity on the northern bank of the Sea of Galilee, but at slightly different locations.

Based on the recent discovery of a Roman-era bathhouse in the Bethsaida Valley Nature Reserve, a Haaretz report this week trumpeted “The Lost Home of Jesus’ Apostles Has Just Been Found, Archaeologists Say.” Its location, according to the article, is el-Araj, one of three sites historically debated by scholars.

Known in the New Testament as Bethsaida, the location is the birthplace of three of Jesus’s apostles — Peter, Andrew and Philip. Aside from New Testament accounts, its history was chronicled solely by the Jewish leader Josephus Flavius, who recorded that Herod’s son Philip Herod turned the fishing village into a Roman polis called Julias after the mother of the Roman Emperor Tiberius Livia Drusilla, aka Julia Augusta. [ Source (Read More…) ]