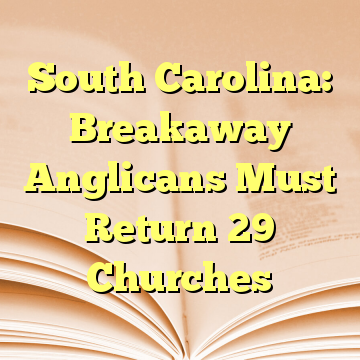 (Worthy News) – A conservative South Carolina diocese that left The Episcopal Church five years ago has been involved in a complicated dispute over its name, leadership, and land ever since.

Today, the Palmetto State’s supreme court decided that the Diocese of South Carolina—which contains about 50 churches and 20,000 parishioners and is now part of the Anglican Church in North America (ACNA)—does not get to keep about $500 million worth of historic church properties that it claimed in the split.

The ruling declares that 29 local parishes cannot take their properties with them and must return them to the Episcopal Church. However, the breakaway diocese can continue to use its name, seal, and symbols. [ Source (Read More…) ]