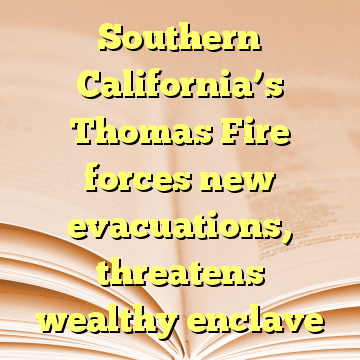 Nearly 8,500 firefighters continue to battle the Thomas Fire in Southern California, which has burned since Dec. 4 and killed one firefighter, destroyed more than 1,000 structures and threatened 18,000 more. The blaze has scorched 269,500 acres so far, an area larger than New York City and roughly the size of the Hawaiian island of Maui.

“It is a beast,” Santa Barbara County Fire Department Division Chief Martin Johnson said at a news conference. “But we will kill it.” [ Source: Fox News (Read More…) ]